In May 2019, 12 technical volunteers from the University of Calgary travelled to Peru with Light Up The World and IEEE SIGHT to install a solar system in Hanchipacha, an off-grid community. The system has had a positive educational, economic, environmental, and social impact in Hanchipacha. 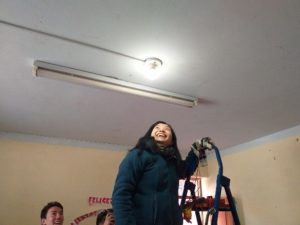 Clara Nguyen, Light Up The World University of Calgary Chapter President, installs a lightbulb in the Hanchipacha, Peru community center

Imagine trying to read a book with only candlelight or cooking using a coal burning stove while the fumes make it difficult to breathe in your home. You have no cell or internet coverage and a steep mountain range separates you and the nearest electricity lines. There are no plans to bring your community onto the grid for at least 10 years.

Unfortunately, this is a reality for many rural Peruvians in the Andes Mountain range. To combat the challenges caused by lack of electricity in rural Peru, Light Up the World (LUTW), a Canadian non-profit focused on the principle that access to energy changes lives, works every day to bring solar electricity to homes and community buildings. In May 2019, IEEE SIGHT Southern Alberta Section collaborated with the organization to install a solar system in the community of Hanchipacha. 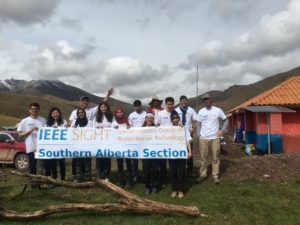 For this project, 11 students and 1 professor from the Schulich School of Engineering in the University of Calgary travelled with LUTW to Peru to install a solar system in the Hanchipacha community center, which serves over 150 people in the village and surrounding area. Prior to the installation, the volunteers received training from LUTW about the fundamentals of solar energy and electrical wiring conventions in Peru. The training emphasized the importance of safety, maintainability, and sustainability of the system.

During the installation, the volunteers worked alongside local technicians (known as “tecnicos”) and LUTW staff. The system consisted of a 325W solar panel, nine 5W LED lights, four 220V AC outlets, and two 150 Ah batteries, amongst several other components. It took a concerted effort, but after the three days, the students and technicians turned on the power and the community center was illuminated! 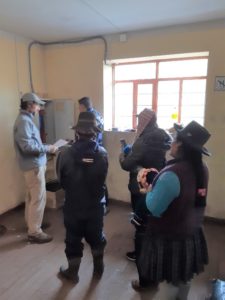 At the end of the installation, there was a small ceremony with representatives of the local community where the importance of the community center and value of the solar system was explained. Some of the everyday uses for the system include providing lighting for town hall meetings, allowing children to study at night, and powering a community kitchen in the village. During the ceremony, one of the authority figures spoke and stated that “He is grateful for each one of us to have been a part of this project to do the installation. They are really happy to have the solar panel installed here … And on behalf of Hanchipacha, he would like to thank all of us.”

Hanchipacha will continue to use the solar system for years to come, and this will provide educational, economic, environmental, and social benefits to the community. The system will be maintained by trained local technicians as well as LUTW staff.

The volunteers were sad to leave Peru but thankful to have been part of this meaningful project. As engineering students, it was an incredible experience to be able to apply skills from the classroom to help under-served communities in such an impactful way.

The support of several organizations was vital to the success of this project, including:

– The University of Calgary Students’ Union Travel and Conference Fund

– The University of Calgary Leadership and Student Engagement Office

A special thanks to Aaron Cohen (LUTW), Chris Jensen (LUTW), Lourdes Niehaus (LUTW), and Dr. Hamid Zareipour (University of Calgary) for their support throughout this project.